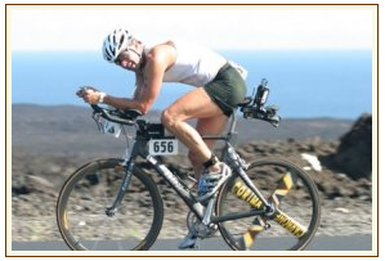 Hold on to the Handlebars, or, Some Calls Can Wait

​By Mitch Thrower
WHEN YOU'RE BUSY and people need you, they often expect to be able to find you immediately, and this responsibility contains a powerful attraction.

In the heat of Racegate's initial growth phase, I began to take my cell phone with me on bike rides and answer calls, until one day I hit a bump. Literally. Traveling down the long and steep Torrey Pines grade on the Pacific Coast Highway in Del Mar, California, my cell phone rang. In a moment absent of logic and rationality, I took my left hand off the handlebar and reached around for my cell in my jersey and answered the call. With cars rushing by, I said, "This is Mitch." and I heard a woman say "Mr. Throw—" and I hit a bump. I started to lose control of the bike, and the something-bad-is-about-to-happen slow-motion effect began. I had to grab the handlebars with both hands, and the first thing to do was let go of the cell phone. I could hear it crash into the middle of the road as I regained control of the bike and my composure.
I stopped my bike, with my heart pounding like a jackhammer. I turned and looked up the hill to see my poor little phone in the middle of the road, with cars racing over it. It was flipped open, a wounded creature. I ran towards it like an owner rushing to a stricken pet. One of the last vehicles to pass was a semi, and my Motorola V60i actually started to spin from the draft created by the truck racing past. After the 18-wheeler passed, I grabbed the phone. The craziest thing? When I picked up the phone I simply put it to my ear, and said, "Hello?" half-expecting to cut a deal with someone on the dead phone. It had gone that far.

That night, replaying the incident in my mind, I vowed to take my cell phone only for emergencies on bike rides. But it was not long before I figured out a way to clamp my cell phone to my handlebars so the caller ID could show, and if an important call came in, I could always pull off to the side of the road to field the call. My 24/7 mobile-attention behavior had almost cost me my life. I foolishly thought I had to answer every call. But the reality is I didn't.

LESSON: We can push our connectedness beyond sane and healthy limits. Too many people feel they must interact with others any time and any place, interrupting whatever people are focused on. Do not be afraid to turn off the ringer on your phone, or better yet, turn your phone off entirely for two full days per week. See how you operate with no cell phone two days out of every week. Hold on to the handlebars in and around your life—let go of the phone. (A friend calls cell phones "selfish phones.") Let go of your connection to other people for just a little while. See how it feels. A part of being connected is understanding how to identify and remove the nonessential.

Mitch Thrower is an author, financier, triathlete, entrepreneur and philanthropist living in La Jolla, California and New York City, he can be reached at mitchthrower@yahoo.com.